Santa Cruz Chameleon: Looking Back at an Ever Changing Beast

In the animal kingdom, creatures make use of all sorts of clever little techniques to camouflage themselves. From striped zebra, to leaf life stick insects to bark coloured treecreepers – all very clever. But it all looks like kids playing hide and seek compared to the amazing chameleon. Capable of actually changing their skin colour by internally manipulating a range of pigments at different levels, allowing them to blend in, signal to other chameleons and even regulate their body temperature, they are one of the most adaptable creatures in the whole animal kingdom. 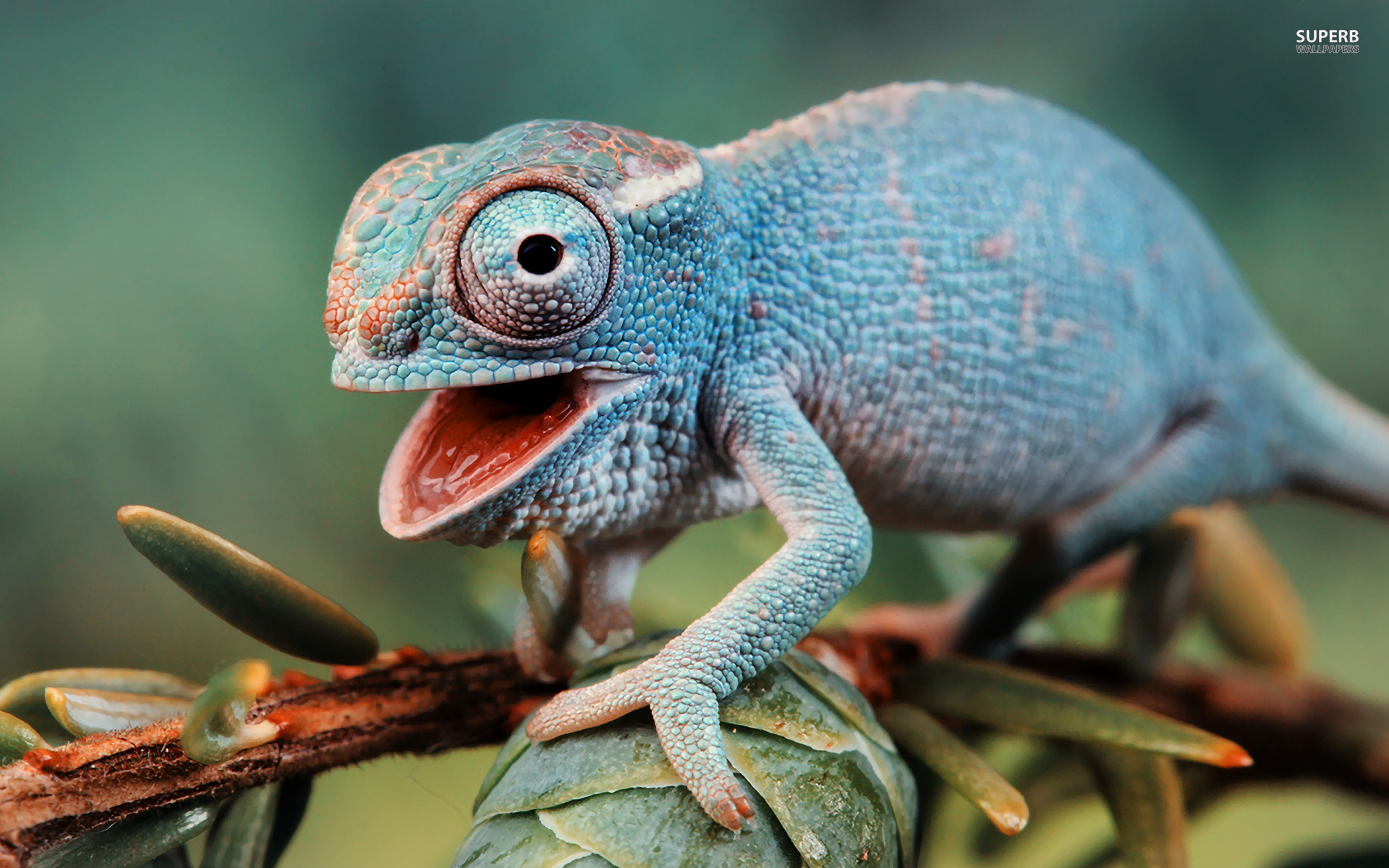 Changing with the times…

And so it is with the Santa Cruz Chameleon. Conceived in 1996/7 as a do-it-all hardtail frame, with some cunning features that made it stand out from the crowd, the Chameleon was an instant hit. I was working for a Santa Cruz dealer at the time and the gaggle of kids lining up to order one as a jump bike was only matched by the number of grown up downhillers calling up to get one built as their spare bike. Capable of running forks up to 100mm (in an age when many forks still ran just 48-60mm this was massive), being converted to singlespeed (when most singlespeeders were journalists), or just set up as a trail bike, the Chameleon frame lent itself to a huge range of disciplines. A common configuration at the time. Did I build that one?

During the first year or so after it was launched, you could see Chameleon at jump spots, downhill races (when the tracks were smoother/faster), XC competitions, out on the trail and even at the very first trail centre in Coed-Y-Brenin (usually being ridden by MBUK Team riders). Despite relatively conventional XC geometry (71 degree head angle) and space for fairly narrow 2.1” tyres, the presence of a headtube/down tube gusset convinced many riders that this what the hardcore hardtail they’d been waiting for. Slightly cheaper than a GT Zaskar and available in a range of brightly powder coated colours, Santa Cruz had created a true all-rounder at a time when mountain biking was increasingly moving towards genre specific bike building. 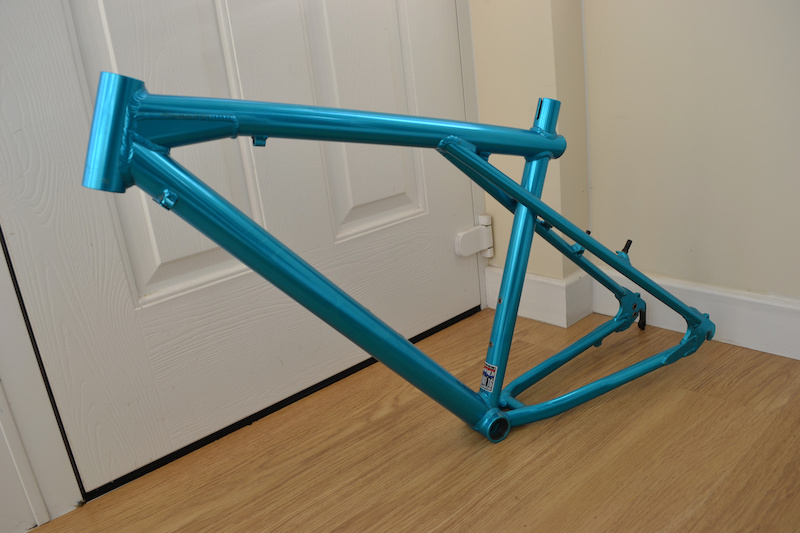 The main competitor at the time. Not any more.

By 2000, the mountain biking world had moved on and the hardcore hardtail was becoming a bit of a ‘thing’. The Chameleon blended right in, moving fork travel potential up to 125mm, adding disc brake mounts and increasing tyre clearance. But the biggest ‘jump’ came in 2003 when the bike was uprated to take a whopping 160mm fork (that’s big travel on a hardtail, even today) and the whole front end was beefed right up. The wheelbase increased by 45mm to increase stability and over a degree was dropped from the head angle. This was now a monster hardtail, with only the most serious jump bikes able match its travel potential and nothing that could handle trail riding or descending in the same way. 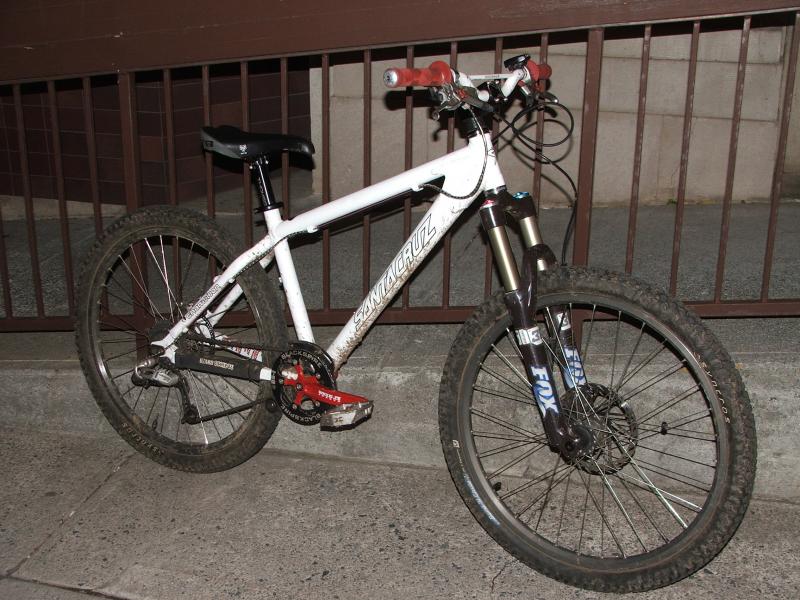 There were more radical changes yet to come. Having always run a horizontal dropout, for singlespeed compatibility and BMX style strength, the 2008 model changed to an eccentric bottom bracket and a more conventional dropout. The frame also gained hydroforming, full box section stays and disc brake only specification. Santa Cruz beefed the tyre clearance to a massive 2.35” and altered to ‘normal’ recommended suspension range to be more in line with the highest performance 140mm trail forks of the time. The Chameleon had shifted again, from hooligan jump machine to proper trail bike once again, while still remaining a highly versatile frame build option. Oh, and the head angle was an ‘on point’ 68 degrees of the sort that remains the trail hardtail norm even today.

Everyone loves an eccentric BB. Right?

A further change was in order in 2013, as the world suddenly went 650b mad. Santa Cruz were not to be left behind and upgraded accordingly. Their go-to trail machine adapted once more, relaxed its head angle to 67 degrees and fitted right in with the rash of newly launched 27.5” hardtails flooding the market at the time. It had the lot – 150mm fork compatibility, dropper post space, tapered head tube, bolt through back end option, you name it. In many ways, Santa Cruz could have stopped there. They had a quintessential hardtail frame, with a long heritage and a loyal following. There would always be a chameleon and it would always be an ‘ordinary, trail bike which would be adapted to pretty much whatever the rider wanted. 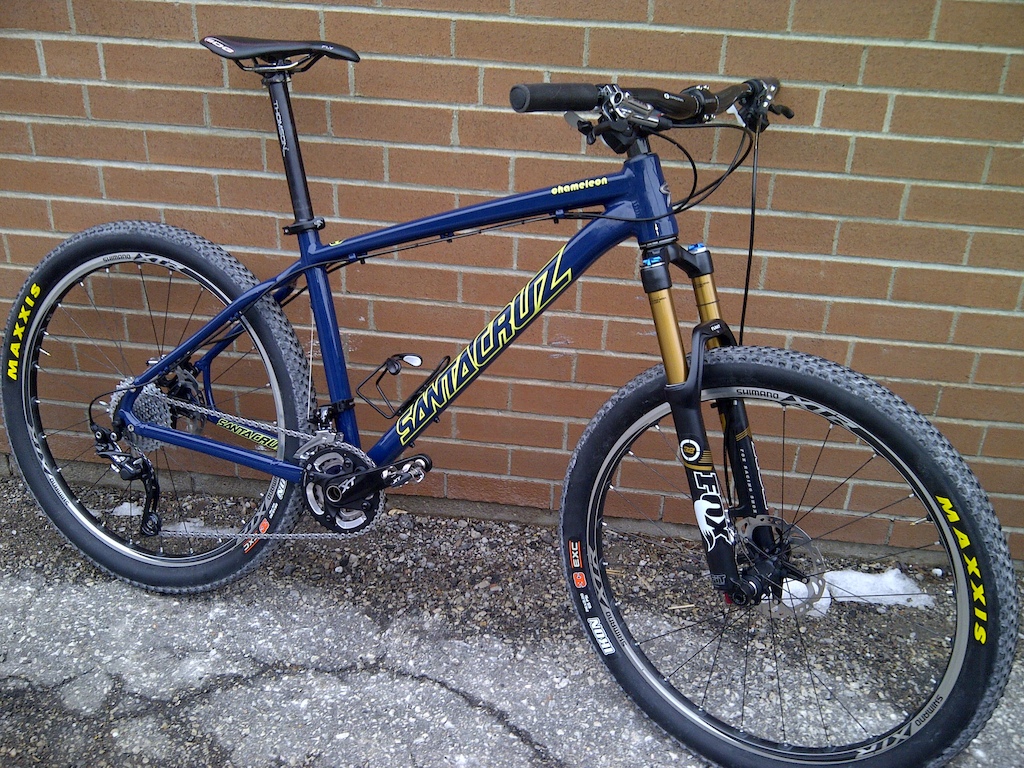 Well, anyone who knows Santa Cruz knows that resting on their laurels simply is not their style. With 29er in resurgence, plus bikes on the up and their new Hightower proving incredibly popular, the Chameleon had adapted once more to its environment. Now even more adaptable than ever, the newest iteration of the Santa Cruz Chameleon has a whole host of options. It can be run as a 29er or a 27.5 plus bike. It comes with geared or single speed dropouts. It can run 142mm or 148mm boost rear dropouts. The frame is has internal dropper routing options, a 67.5 degree head angle, takes a direct mount front mech or can run 1x and comes with a 120-140mm fork rating.

The new Chameleon in plus bike form…. and as a 29er. Santa Cruz reckon the new Chameleon could hit the trail centre, a weekend of bike packing or play the winter snow basher with equal ease. The lightweight, custom hydroformed 6000 series aluminium frame is beautifully finished. Fit 3” plus tyres and you could certainly clear a path through a light blizzard, while narrow 29er tyres could well make this a competitive XC race bike. Should the grime and grit be a bind for your gears, simply convert to singlespeed and keep your full suspension bike out of harm’s way or just slap on a big fork and play in the woods on 650/2.6” mid-fat tyres. This bike is such a versatile skin changer that a real chameleon would be jealous.

All the options, in one place. Sort of.

The brand new Santa Cruz Chameleon proves that the old N+1 (where N is the number of bikes you own and the overall formula is the number you need) rule may just have been broken. From now on, the number of bikes you need is Chameleon+0. Unless you absolutely must have a downhill bike or plan to cross the Sahara, the Santa Cruz Chameleon now offers most riders every bike they will ever need. Of course to save time, you might want to have several versions of the Chameleon, so maybe the formula ought to read N+Chameleons. Whatever the real answer, we know one thing, the Chameleon is dead, long live the Chameleon! 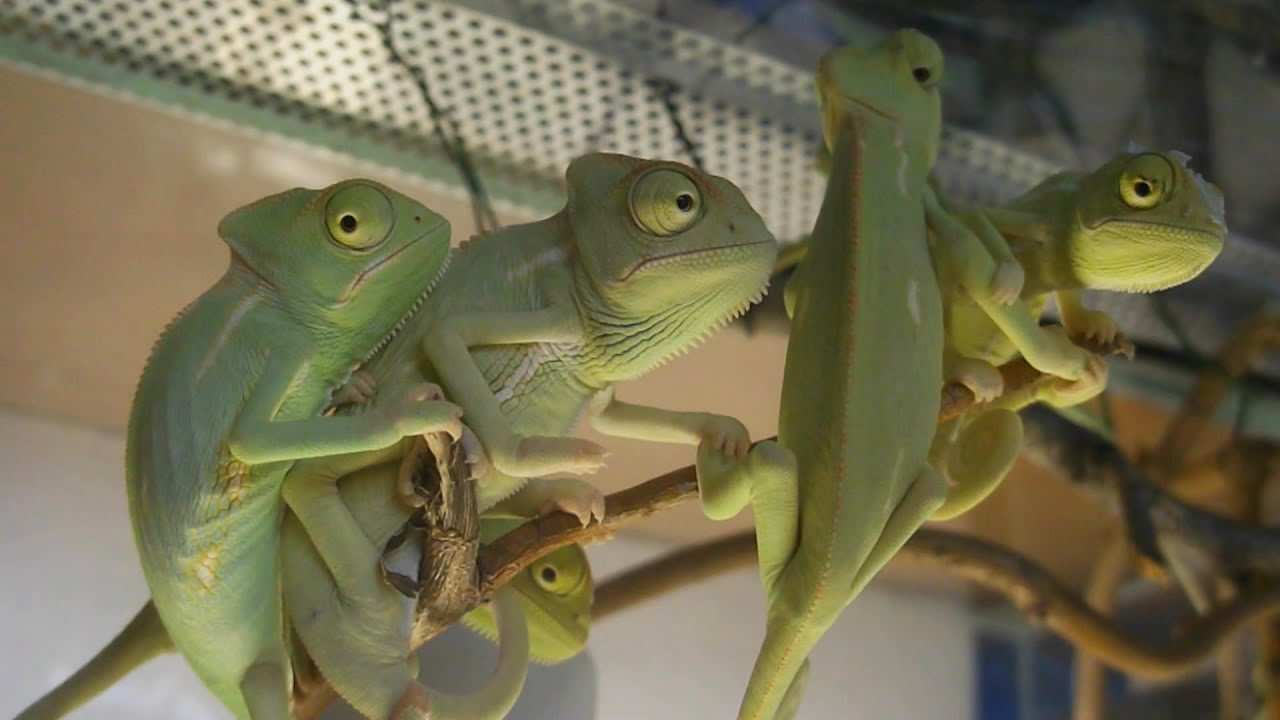 What is the collective noun for chameleons? You’re going to have to learn.