Öhlins Suspension: The New Old Kid on the Block

Öhlins Suspension: The New Old Kid on the Block 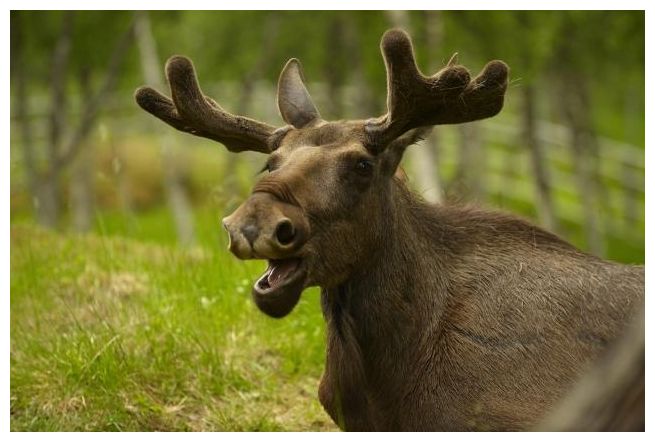 A Swedish moose, looking shocked at the Ohlins news.

Aah, Sweden, a country of moose, forests, reliable cars, friendly blond giants and, um, the highest performance suspension company in the world. Who knew? Well, pretty much everyone in motor sport it turns out. For a shade over forty years, Öhlins has been offering some of the finest precision manufactured suspension products that motorcyclists (and race car drivers) could lay their hands on. Luckily for us mountain bikers, Öhlins have now started making shocks and forks for our particular brand of two wheeled sport. Starting in 2006 with the TTX coil/oil compnents and now featuring a pair of trail forks, custom damping for Fox 40s and a brace of rear shocks (one air and one coil) the Öhlins MTB family is growing fast. 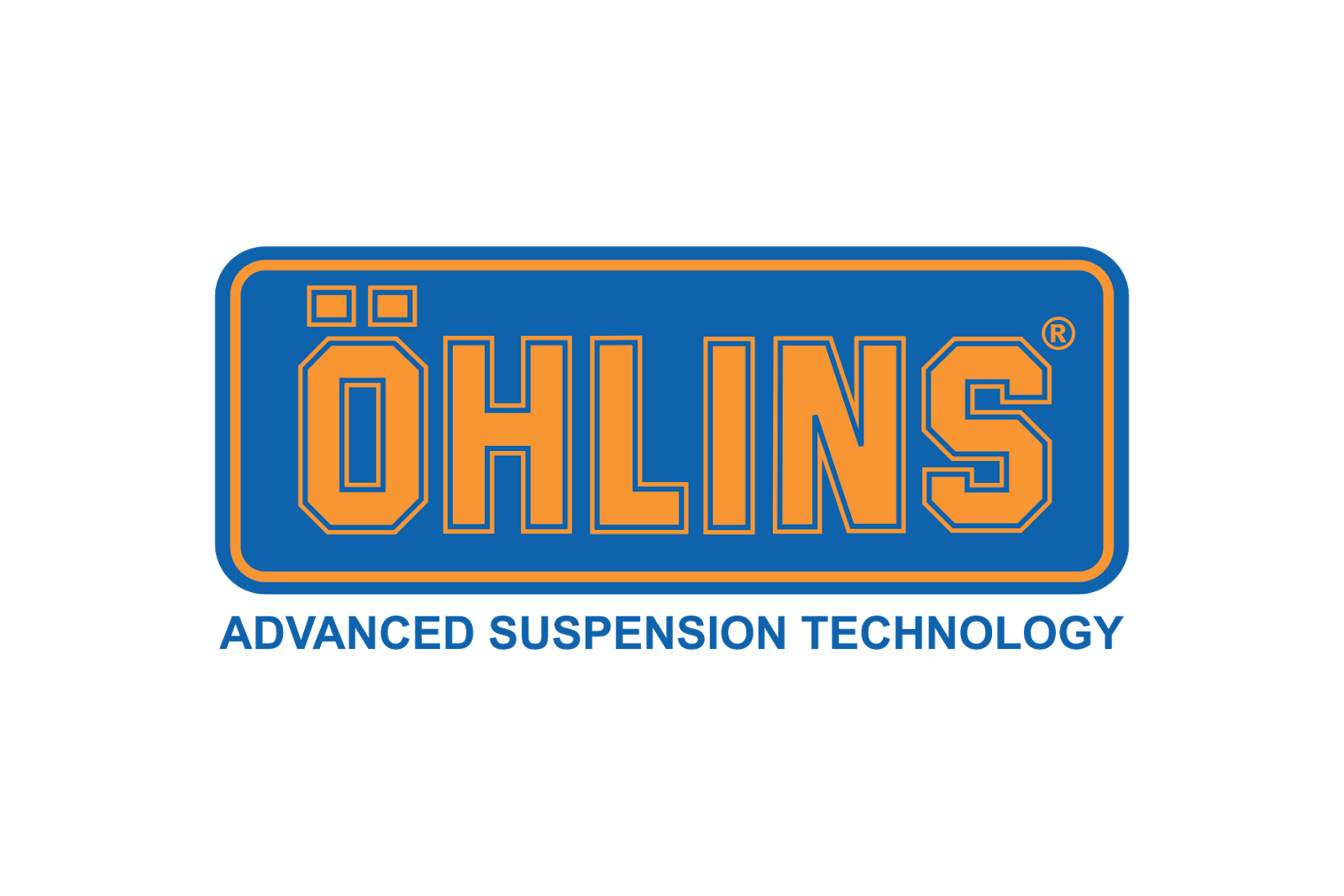 Does what it says on the registration plate.

You, of course, may never have heard of Öhlins and might well need a little convincing that these guys can cut the mustard up against the likes of Fox, Rock Shox and the other members of the MTB suspension establishment. The fact is that there are few companies in the world with greater respect within the motorsports industry and none at all who are also based in an industrial estate in Sweden. Well let’s take a little look at their heritage, shall we. The rich history of MTB suspension – on a wall.

Back in 1976, Motorcross racer Kenth Öhlins reckoned that the internals on his bike were performing in a less than optimal fashion. The internals were too sticky, big hits knocked him off line with too much ease, stutter bumps caused unpredictable kick back and low speed compression issues made starts sluggish. He felt he could do better.  The key lay in the bits that sit inside the shocks – dampers, reservoirs, the outer coils and the interface of shaft and shock body. Öhlins was convinced that everything could be built to a higher tolerance, with more refined use of materials and closer attention to detail than the big Japanese manufacturers were giving to, what was to them, just a part of the whole. If the suspension unit became the whole, Öhlins believed (as did a certain Mr. Fox, on the other side of the Big Pond) that the performance of suspension could change the whole MX game.

He wasn’t wrong. It took less than two years to land the first world championship win and by 1981 Öhlins were supplying the all-conquering Yamaha team with everything their bikes needed to bounce to victory in the massively competitive 250cc Moto X category and quickly followed up on sports bikes, also at 250cc level. By the beginning of the 1990s, Öhlins victories were also found on 500cc bikes (now Moto GP), Indy cars (the CART series), and sports cars (Öhlins provide a popular Porsche suspension upgrade).

You can’t see it, but underneath that German exterior lurk springs from Sweden.

While all this was going on, Öhlins were also working on a supremely ambitious electronically controlled suspension system (CES) which would soon be appearing on Ducati superbikes – the Öhlins Mechtronic. This sort of cutting edge work, along with a pathological attention to detail, continued to rack up competitive victories for Öhlins. By the time the electronically controlled suspension on Noriyuki Haga’s Moto GP bike had propelled him to a supremely controlled victory at Donnington in 2008, Öhlins had racked up more than 200 wins in different motor sport competitions and, very quietly, were also preparing to be victorious in non-motorised sport. 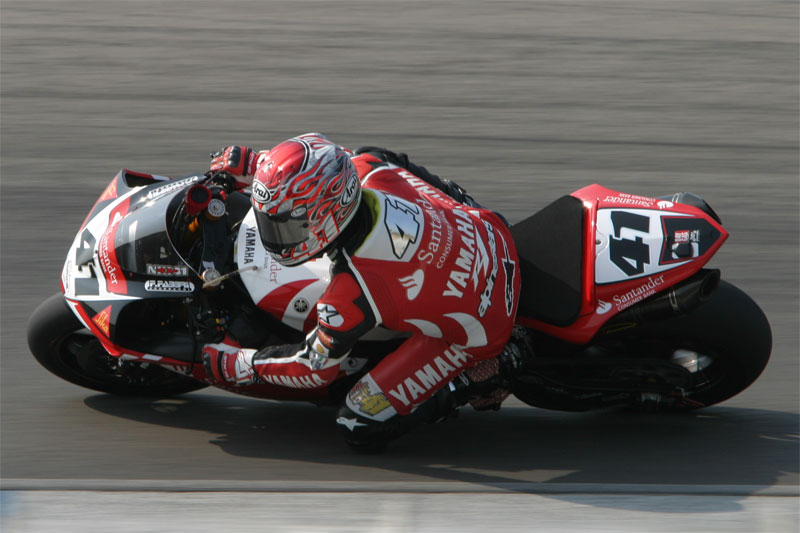 Back in 2005, a brand new suspension rear shock had taken the world by storm – Cane Creek’s Double barrel was an air shock with a difference. Rather than simply taking small hits and leaving long travel performance to coil/oil shocks, the double barrel could not only perform admirably in 180mm travel bikes but, unlike other air shocks, could do so on Alpine length descents, without overheating causing immense fade. How does this relate to Öhlins? Easy, they provided the internals. Dia-Compe, Cane Creeks international wing had long been aware of the credentials in the world of powered vehicles and the collaboration had been carefully sought after. The result was a revitalisation of the air shock as an all rounder and a massive reduction in weight for longer travel bikes. Some might say that Öhlins even facilitated the birth of enduro, as Cane Creek Double Barrels were quickly retro fitted to big hitting bikes in order to make them light enough to go up, as well as down, hills.

This is what the inside of a shock looks like. No, I have no idea what any of it does either.

Perhaps unsurprisingly, Cane Creek/ Dia-Compe weren’t the only ones who approached Öhlins with a view to collaboration in producing a new level of suspension performance. A certain Big S were next in line and the initial result produced a set of proprietary shocks for the Enduro models (see, Öhlins made Enduro happen) which improved small bump performance and gave the MTB journos a new brand to write about. One lovely Ohlins shock, inside the bike is was made for.

Interestingly, Kenth Öhlins has actually not been involved in the company directly for some time, but had bought back 95% of the ownership from long term partners Yamaha in 2007 and it seems not too far a shout to suggest that it was his return that sparked the branch out into MTB products. His continuing influence is almost certainly evident in the next chapter of Öhlins mountain bike product development. Having successfully created the internals to Cane Creek shocks and engineered the proprietary models for Specialized, the natural path to follow was to create their own aftermarket shock. The TTX coil system had initially been released in 2006, but the company really went for it in 2012, supplying several downhill teams with what some racers described as ‘the perfect coil shock’. 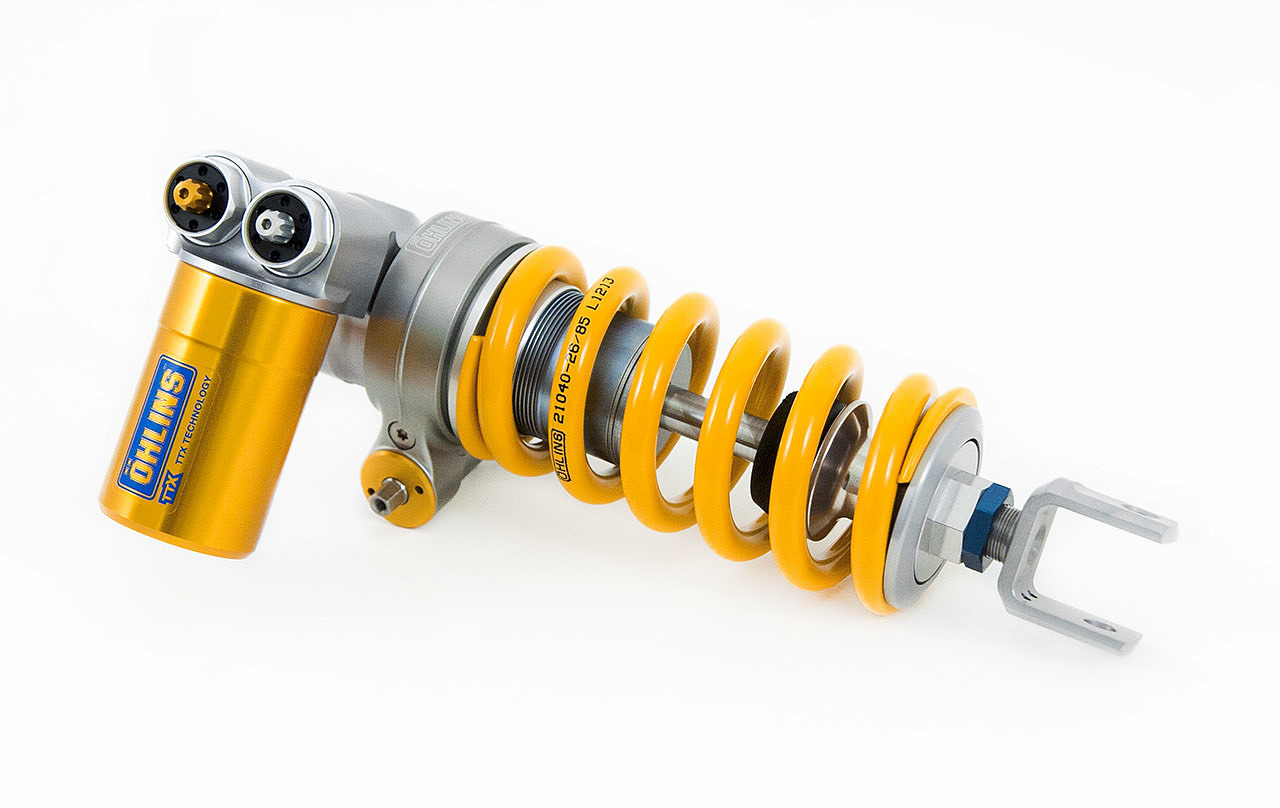 The telltale golden end and yellow coil. Watch out for more of these on more bikes in the future.

Enough? Of course not. Alongside the TTX, Öhlins had used their experience with air shock production to make their own aftermarket model, the STX. Featuring a large volume barrel, to avoid having to double up and therefore saving weight, the STX is incredibly tuneable, while also being one of the lightest shocks that you strap to the back of your bike. While it is specifically designed for Specialized Enduro and Camber bikes, we won’t be at all surprised (with the advent of metric shock sizing) to see a bunch of compatible bikes in the very near future.

And this is the air shock. Still a nice hint of gold there, see?

Not at all affected by compatibility, are the very latest Öhlins products – their forks. The brand new RXF forks comes in two flavours, a 29er specific 34 and slightly more versatile (650b+, 29er, 650b) 36 stanchion model.  Both forks utilise Öhlin’s now legendary TTX damping system, adapted for front end use, to deliver buttery smooth travel and endless adjustability. The forged uncrown uppers and lowers deliver stiffness that is class leading and the stealth looks make for a very tidy front end set up.

So stealth. So very, very stealth. I think I may need to call my bank manager…again.

The 34 model gives up 120, 140 or 160mm, meaning everyone from XC racers, to trail riders to enduro demons can slap ‘em on the front of their 29er. The 36 allows for four different travel options (120-160 in 10mm increments) and features Boost spacing for more aggro riding and better compatibility with 27.5+ bikes. Whichever you choose, the damping and adjustability will let you set up a fork that perfectly matches your riding style. For DH riders, the TTX damper has been designed to work with the Fox 40 fork, meaning that even the most extreme riders get an Öhlins option on their bike. 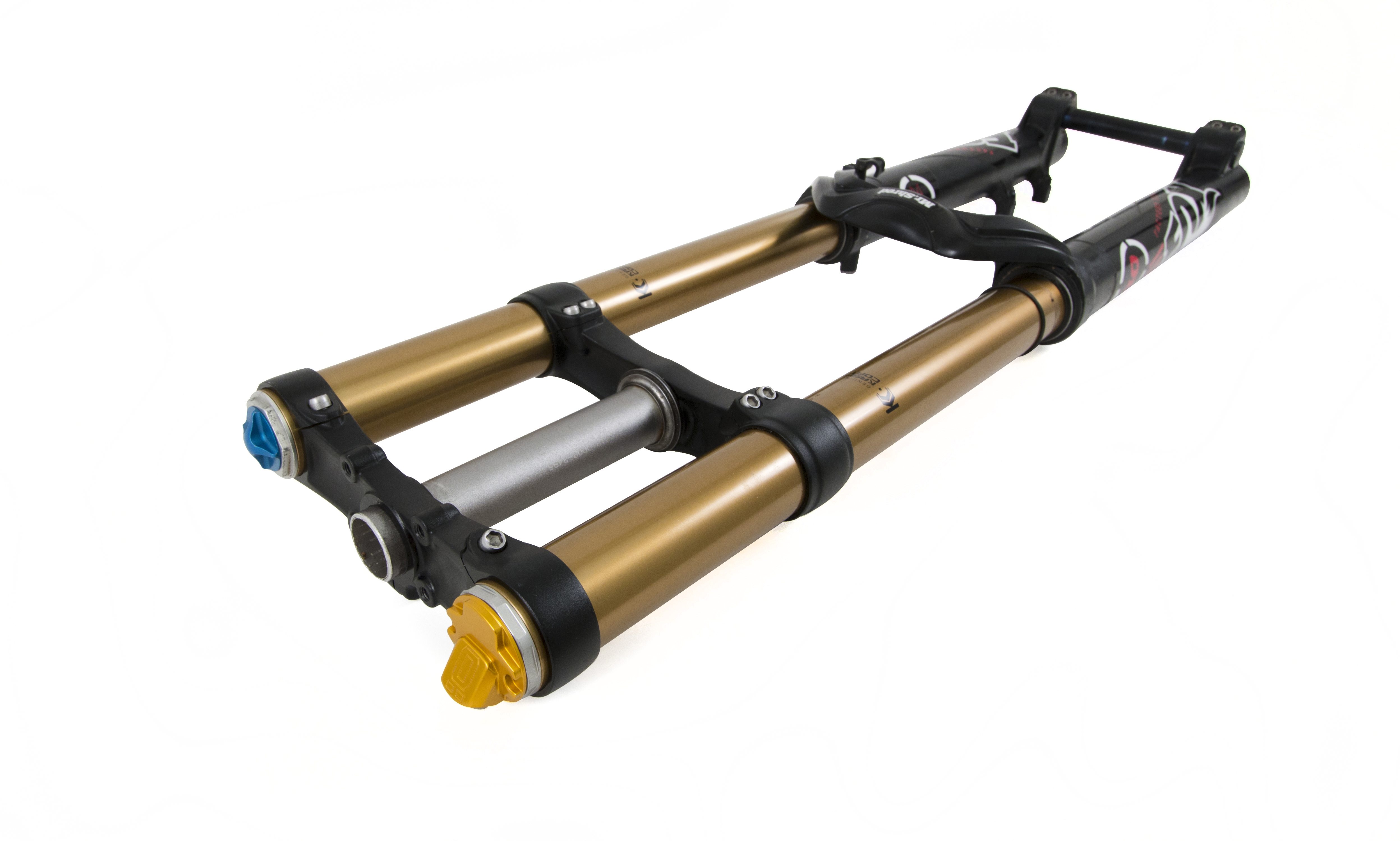 Fox 40s with the gold adjuster telling you what hides inside.

Just as Kenth Öhlins intended, way back when he wanted to improve the performance of Moto X bikes, the mountain bike now has a fork and shock combination that sets a standard for precision, performance and tolerances that put every other option to shame. When you come to your next custom build, upgrade or decide to branch out into plus biking, Öhlins has the bouncy bits for you.

Just to prove that the forks can go on all sorts of bikes, here are a pair on a trail ready 29er.

Want some more convincing? One of the world’s most successful downhill teams has just opted to switch from Rock Shox to Öhlins. That’s right, the big S have ditched the worlds best known suspension makers for the Swedish maestros in the belief that it will bring them more success and glory than the SRAM giants have managed. Watch this space…

Get used to the sight of these shocks right beside the podium at UCI DH events in 2017.