All I can see is the front tyre and my bars. Everything else is blurred. I get hints of trail – a rock here, a dip there. Suddenly there’s a rise in the track, slightly off camber. Slick roots reveal themselves on the upslope. It is no more than eighteen inches high, but I find myself panicking. I’m carrying too much speed. I’m going to be launched into the trees. I grab a handful of rear brake and, for some reason, the front wheel locks up. The tyres catches on a wet root and skitters sideways. I let go of the bars in defiance of logic and SNAP! I’m wide awake. It is 3:30 am. I’m dreaming 24 hour race dreams again.

Wet roots in the darkness = nightmares

It was never meant to be like this. The whole thing started out with an article in Singletrack magazine. Chipps reckoned that the 24 hour race scene had changed, softened, become…fun. No longer was it full of shaggy bearded men & women wringing the last drop of joy from XC racing. Now it was groups or mates, colleagues families, taking on that extra challenge. A bit like the ‘ride to Paris’ or ‘Moon Walk’ events. There was camaraderie, beers, music, a party atmosphere. Fancy dress was more common than full lycra. Everyone could now give 24 hour racing a try.

No one wore this. I wish they had.

It had long been on my MTB bucket list. Alongside Moab, Morzine, the off road coast-to-coast, the idea of a 24 hour race had always appealed, just seemed a little…serious. Now here was the push I required. All that I needed to do was select the right event. Something as close to mid summer as possible, but not too big or intimidating. The Bontrager24Twelve (now Pivot24Twelve following a recent sponsor change)  fitted the bill. Described as ‘family’ friendly and set on the famous world cup circuit in Newnham Park, Devon, it looked to be what I was after. Now there was the question of which category to race in. There was no way I would attempt a solo. Those people were weird. I’d seen pictures. They had hollow eyes and limbs like steel girders. None of them ever smiled. The pairs was tempting, but that could really place some strain on a friendship, especially if said friend was either much faster or much slower than me. I don’t have enough friends left to lose another one.

What I needed was a team. The open male category allowed up to five people. That ought to be enough to balance out any performance inconsistencies and provide at least a bit of time for sleep. Now, who did I know who was bonkers enough to join me for 24 for hours of cross country racing? A Facebooks message went out and, to my surprise, people agreed. Five of them. Now I had a team, it was time for some planning.

Anyone who competes in any sort of endurance event will tell you that the key is in the preparation. Train properly, make sure your equipment is all in good order, allow plenty of travel time, sort your diet out – all things I immediately spent the next four months failing to do. Sure, I ran a bit and tried to ride daily. I even gave up beer for a few weeks (replacing it with cider, because apples are healthy – right?) and added a morning sit up regime to my daily routine. Otherwise, along with my team mates, the bulk of my preparation came in the form of chatting to people who had done 24 hour events to find out what I should be doing.

Well, the bike is a key starting point. We chose lightweight carbon hardtails, borrowed from a major manufacturer and I reckoned a Santa Cruz Highball would have been ideal. By the end of the race, however, I’d put in more laps on full suspension bikes than hardtails and ended up convinced that something like Banshee Phantom or Tallboy might have been a better bet. The 29er wheels might not be the best in the tech sections, but the way they roll over rougher parts of the trail and carry speed on the flat meant that my test lap on a 116mm travel full bounce 29er was easily my quickest.

Bike aside, you will need A LOT of kit. We all had only one pair of SPD shoes, but the smart cookies had two each. Putting on clean, dry shoes at 3am gave them the edge. I changed socks three times, but could easily have done so every lap had I taken enough pairs. My choice of Endura merino socks was smart though, they still smelled nice at the end and took the chill out of the night time laps. We all needed more pairs of shorts, but my team mate’s Fox Attacks were the only ones that dried fast enough to still be rideable by the morning. Semi casual jerseys were preferable to full on race kit, so we’ll be taking tech tops rather than team sponsored kit next time. Everyone destroyed their gloves. We needed more pairs.

Being able to repair bikes is a must, so we took a decent Park PSC-10 work stand and a stack of tools with us. Punctures were expected (although we eventually suffered none) meaning a high quality track pump from Lezyne and more Continental inner tubes than I’ve ever seen in one place. Keeping it all under cover meant that a gazebo was a must and, knowing that we’d be waiting around for up to 2 hours between laps, plenty of seats were needed – I tracked down some cool all weather bean bag seats, which proved popular.

Finally, I had worked out that we could expect at least 8 hours of dark conditions riding. This meant lights and plenty of them. As a Lezyne fan, I packed a couple of Mega Drives for my bars and a Power Drive 600 XL for helmet duties. I knew that there would be guys out there with 6000 lumen ultra-lights, but I banked on being fast enough to stay out of their shadow. As it happened, we needed the full range of lights at our disposal. Drizzle from 7pm, meant dusk was early and heavy cloud dulled the effectiveness of dawn until well after 6am. You will need a powerful front light – like this one.

The race then: I think that we all admitted to being more than a little nervous. Following advice, we planned to run one lap at a time for the first few until we had the measure of the course, our speed and how tired we were getting. Jirka, our XC racing Czech, led out and flew round the extended first lap at a frightening pace. As the first relay happened and Simon headed out for the first ‘normal’ lap, we somehow found ourselves in third place in our category and twentieth overall  – which included people on a mere 12 hour race. Amazing!

The next few hours were a blur of putting in the fastest possible lap, handing over the baton, running back to the camp for more water, energy gels and caffeine shots, trying to sit down for a bit, heading back for the next lap and repeating. In this time, I decided to try one of the test bikes available on site. A short travel, carbon framed 29er, I had not really ridden anything like it before and expected a slightly slower lap time as a result. Wrong. I slammed it. Almost a minute faster than any lap I was to manage for the next eighteen hours. Lesson learned – bouncy is best.

Dusk arrived with, as mentioned, drizzle. Disclaimer time: when it rains, I become the world’s worst mountain biker. I get in a foul mood, can’t choose a line, can’t hold the line I haven’t chosen and generally spend more time dabbing than riding. I had three laps in the dark with wet roots. I was not very fast. Third place came and went. Now we were battling for fourth.

Overnight, we all rode double laps to allow for a decent period of sleep. Analysis shows me that everyone apart from me rode their second lap faster than their first (I have an excuse, sleep deprivation resulted in my forgetting to top up my hydration pack and I had to potter off in search of a tap in the middle of my second lap, losing about ten minutes in the process) so I will be insisting on triple laps next year. 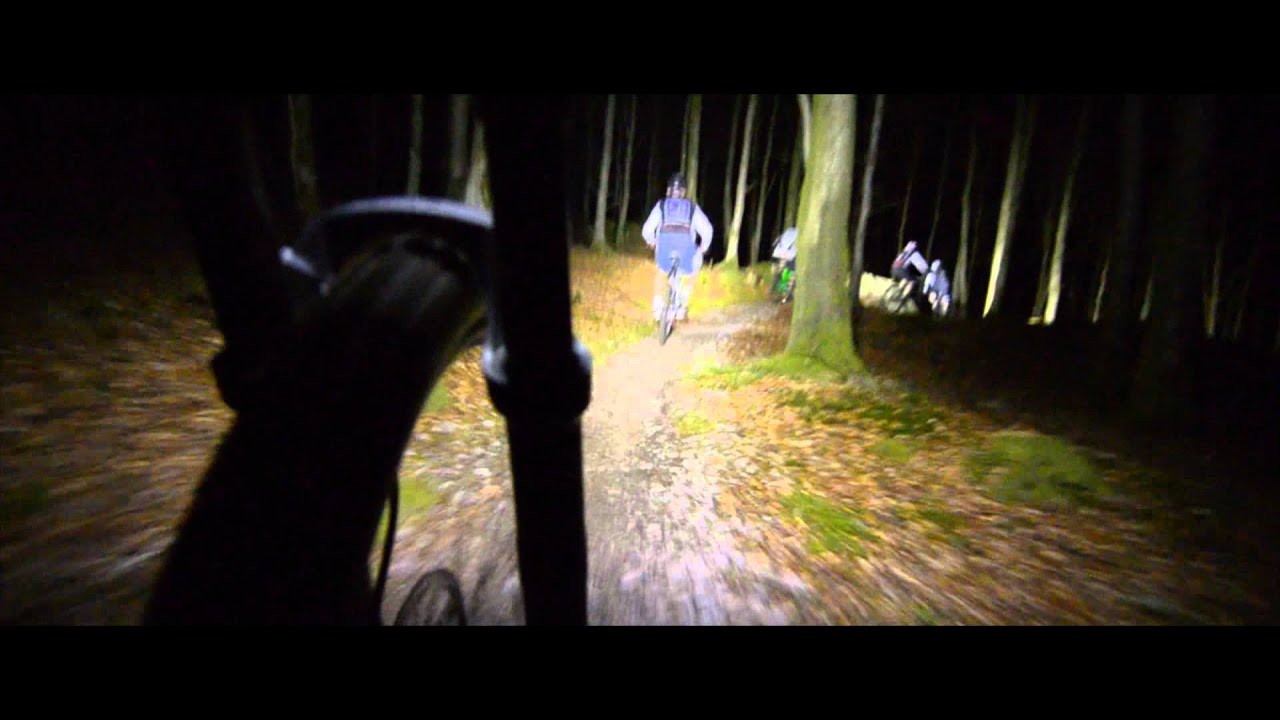 I can’t wait until dawn.

Ah, next year, yes. By mid morning, the night time horrors out of the way, we had generally agreed that we would be doing this again. I’m not quite sure how the others came to this conclusion, but my revelation was as follows:

My penultimate lap was at around eight in the morning. I was feeling stronger. There was enough energy product in my system to run a power station. I decided that this was the lap upon which no one would pass me. Somehow, I made it through the initial singletrack without seeing a single rider on my tail. The same was true up the big climb. I just kept reeling people in. Still no one immediately behind me. Before I knew it I hit the super-fast single track that led to the final descent. Still no one. As I rounded the rooty switchback that marked the half way point of the big downhill, I heard squealing brakes. A lycra clad race boy, who I recognised as being part of the second place team in my category was right there. He couldn’t catch me on the descent, but I would have to work hard on the fire road. I let the bike go. Full warp speed to the bottom. Then I stomped on the pedals down to the last piece of single track alongside the river. Problem. Two slower riders. No passing place. I was caught! No matter. He was stuck too. All I needed to do now was beat him on the flat, fast, fitness first grass section through the solo riders campsite. Bum. I had one chance. He clearly wasn’t great at technical riding. If I could hit every dip and hairpin bend on the grass at full pelt, I would probably put enough distance between us to survive the straights. Dip after dip, bend after bend, I opened up 5-10 metres and straight after straight, he reeled me in again. There was one last drop and muddy switchback to do. “I love this bit” I called out as I popped my bike over the edge. All I heard was a defeated sigh. He ended up more than 50 metres adrift and I was back in love with mountain biking. An XC racer on a tech section. I was quicker – honest.

We finished up by coming fifth, after a tactical error on my part through my final lap (I decided not to force my tired team mate into an eleventh lap so slowed down on the opening flats). No matter. We did finish our twenty four hours of racing. My team mate Dave took the final turn and pulled in at 2 minutes past midday. Hugs all round, an end of race photo and we were done.

So then, next year. Bouncy bikes as well as hardtails. A bigger support team. Shared driving on the way down and definitely a more reliable fifth team member. But we will be back and we’ll be aiming for a podium. See you there!

Now I just have to try to stop having those dreams.